Until October 9, you can enjoy seven large-format sculptures by the author on universal Spanish themes. 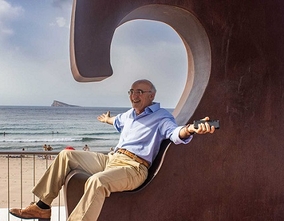 The sculptural and monumental art of Juan Méjica 'takes', until the beginning of October, the Paseo de Poniente, an unparalleled location for an also unparalleled exhibition.

This is a top-level exhibition made up of seven "large format" sculptures by a sculptor of recognized national and international prestige, who has works spread over four of the five continents. An exhibition that is here to be with us until such an important date as October 9, which will be coexisting with the day-to-day life of a city that is already in full swing at the beginning of July and that hundreds of people will be able to admire thousands of people over the next three months.

With this large-format exhibition on public roads, the third to be organized in a very short time, Benidorm consolidates itself as an "open-air museum", thus bringing culture closer to the population and allowing the public to enjoy art in full street.

For his part, Juan Méjica explained that the seven pieces on display respond to an iconography of “universal Spanish themes” such as “the bull, anthropomorphic beings, the solar woman, the asturcón or the yew”. The author has detailed that these are "hardened and with character" pieces, "between 2 and 5 tons" and "almost 4 meters high", made of an alloy "of steel and copper", resistant to the action of saltpeter .

Mexico has ensured that "the pieces by the sea can bring out all their potential", and has added that in this "open-air museum" in which the Paseo dePoniente is configured "everyone is the protagonist": pieces and public.

In this sense, he has stressed that his work "is precisely designed to be touched, to be lived" and has expressed his wish that "the millions of people who visit Benidorm take away that image" of the city with their sculptures.

The seven sculptures that make up the exhibition are arranged from the beginning of Paseo de Poniente -at Jaime I avenue- to the intersection with Xixo avenue.